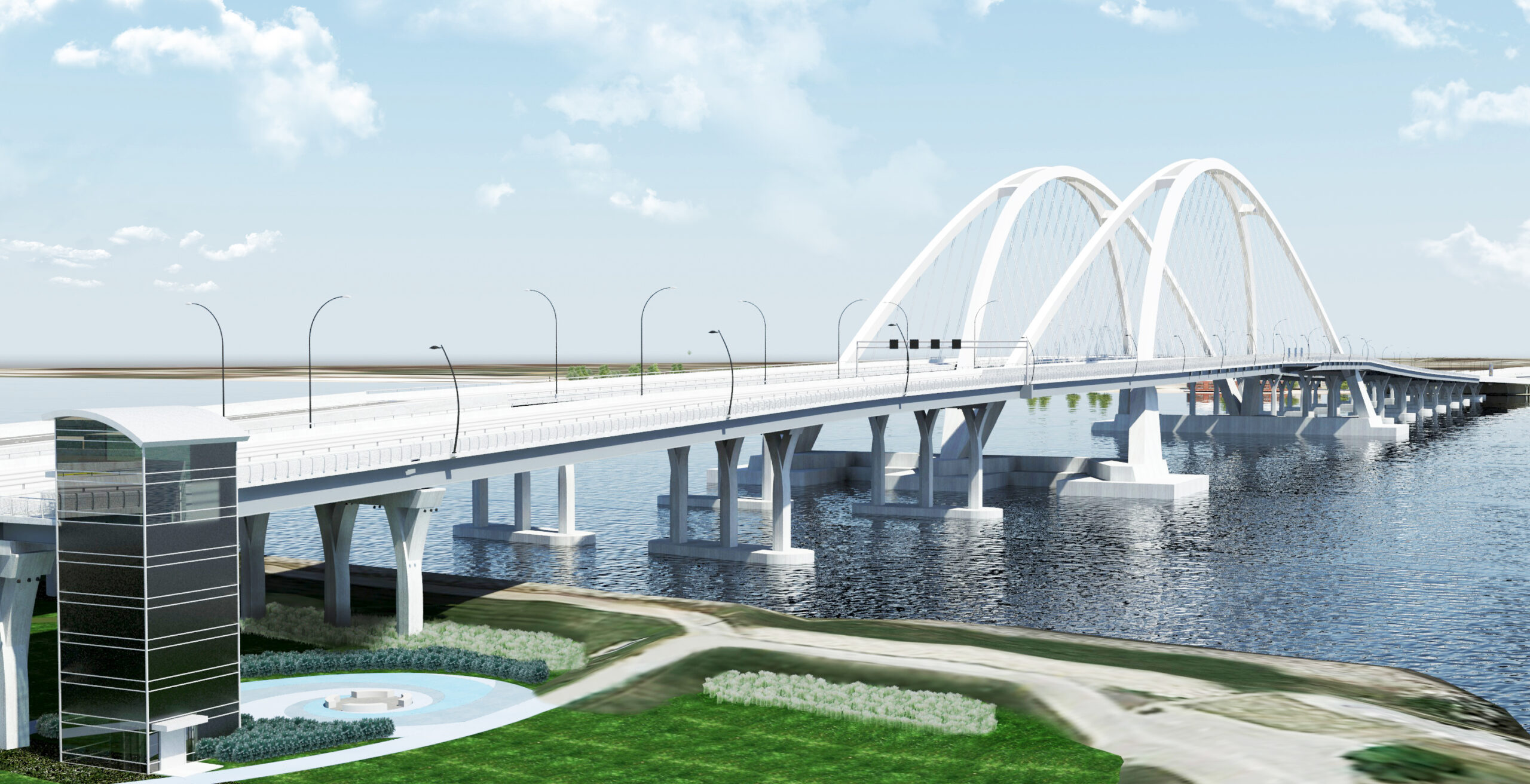 Hahn Ready Mix is proud to be the concrete supplier for the new I-74 Bridge, with construction commencing in Summer 2017 and finishing in December 2021. By the end of the project, Hahn supplied over 213,000cy of concrete to the five major projects on the I-74 Corridor. https://i74riverbridge.com

This new 12 lane bridge (eight live traffic, four shoulders) will replace the existing and aging I-74 bridge which supports only four lanes of traffic. Construction began in summer 2017 and should be completed in late 2021. Access to many of the structural pours were strictly via trucks on a barge. This bridge required supermassive concrete pours with extreme temperature controls and pour durations up to 72 hours in length. The mix design for the arch ribs and columns presented considerable difficulty as it required a lean, 70% slag self consolidating mix design that needed to be nitrogen cooled down to 45-55 degrees and then put on a barge for an hour trip out to the jobsite before going through a pump into the forms.

The Illinois I-74 Viaducts project began in late 2017 and will be fully open mid summer 2021. These new bridges and interchanges over downtown Moline feature self-consolidating concrete columns.

The Iowa I-74 Viaducts began in mid 2017 and will be completed in late 2021. The Bridges over downtown Bettendorf feature mass self-consolidating concrete columns, as well as mass concrete footings and pier caps.

This project began in late 2017 and concluded around Christmas 2020. The project included a complete reconstruction of I-74 from 7th Ave in Moline almost all the way to John Deere Road, including new bridges over 19th St (twice) and 12th Ave. Much of the paving was supplied by another ready mix supplier, but Hahn’s scope included all of the structures, hand work, and a fair amount of the smaller paving pours. The project featured mass concrete pier caps.

This project is a complete reconstruction of I-74 from Lincoln Rd south to Mississippi Blvd. The Project began in 2018 and will be completed late 2021. Much of the mainline paving was completed by another ready mix supplier. The subcontract work was in Hahn’s scope, and Hahn assumed the prime contractor supply in fall of 2020 to the end of the project.

Mass Concrete requirements on the project were variable based on the size of the pour, but could require concrete as cool as 55 degrees at point of placement, even in the middle of summer! Most mass concrete mix designs utilized a 70% slag replacement of cement. Many of the mass concrete pours could only be reached by barge and were of such enormous size that pour durations could be as long as 48 hours.

The Arch Ribs are the concrete bases at foot of each arch. The transfer the load of the arch and the roadway to the footings of the bridge. The arch sections were made of 70% slag self-consolidating concrete due to the high rebar congestion, a desired smooth surface, limited openings for placement, and high strength requirements. The Arch Ribs were also subject to mass concrete specifications, and often had to be placed at 55 degrees at point of placement.

Nearly all of the river structure pours and some of the bridge deck had to be placed via trucks on a barge. These trips could sometimes be as long as three hours, and involved a great deal of extra safety precautions. After some trial and error, it was determined that four trucks per barge was the optimal amount to maximize the placement speed. It was also a very cold trip in the winter!

In order to meet the demanding mass concrete specifications, liquid nitrogen was utilized to cool the concrete. In 2018, Hahn used a direct injection system to cool the concrete in the trucks after they were batched. This method was effective but time consuming and took incredible quantities of nitrogen. After nitrogen supply issues became untenable, Hahn switched to the NitroCrete system for 2019-2021. NitroCrete doses nitrogen onto the material belt in the plant, vastly increasing the cooling efficiency per gallon of nitrogen. Both methods were hard on the equipment to which they were subjecting nitrogen, but we were able to meet the requirements to have concrete cooled to as low as 40-45 degrees at the plant in the middle of summer.